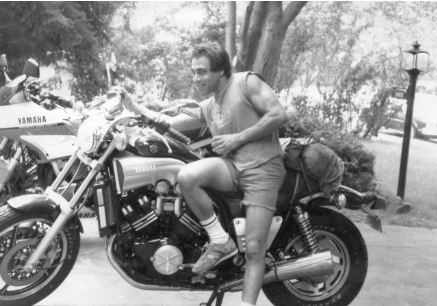 Vmax
The Yamaha V Max was the  most powerful factory motorcycle ever sold to the public when It was introduced in 1985. It changed everything I thought I knew about how to ride. My friend Johnnie said the caption should say “from Vmax to Flowmax in 10 years”

Flying Supine
1986 Mt Equinox Vermont.  Elevation 3,800 ft.
I had an altitude gain of 600 ft over the top and the flight duration was about 45 minutes.   Three pictures were put together to make  one.   The first picture I’m standing on launch, the second picture I’m running down the ramp and the third picture shows me soaring  600 ft. over the top.   I flew  a supine harness (sitting or reclined) and the glider was modified  to accommodate that style.  The vast majority of hang-glider pilots consider supine hang-gliding to be radical and dangerous.  I took my lumps for that but I wouldn’t have changed a thing. 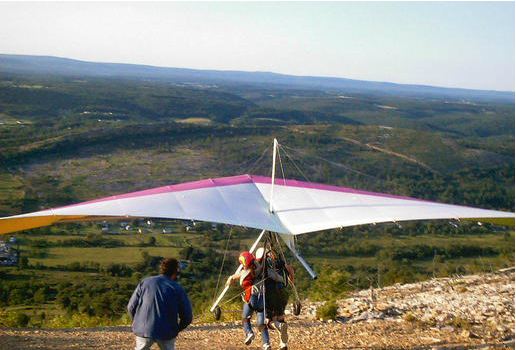 When I met my wife she told me that she had always dreamt of flying like a bird. I told her I could make that happen. Three years later I arranged a tandem flight with a certified pilot. I helped them launch and watched as her dream came true.

When you remove a tree why not pay tribute to what once lived there.

How to Open a Pomegranate

Fitzgeralds April 17, 2011
I have played drums in bands before but this was the first time I played guitar in public.
I had the honor of playing with the amazing John Nardo. We rehearsed it once and John laid down this great base line. The song is Jethro Tull’s “Locomotive breath”

A new sport is born. I call it Al Boarding . Its named after my 98 year old father Al. He doesn’t say much but he did say he had fun that day.